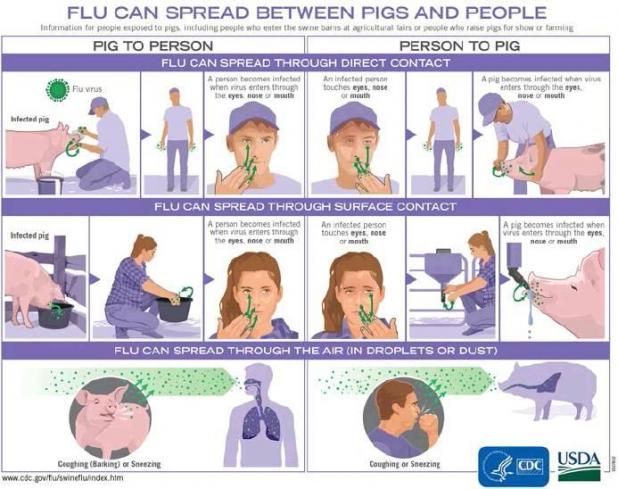 This poster is offered by the CDC on its website to explain how flu viruses can spread from pigs to people and from people to pigs.

Scientists have known for some time that pigs and people share some significant biological similarities. Unfortunately, this includes the ability to infect each other with influenza viruses.

As pig farmers prepare for the annual season of county fairs and livestock exhibitions, they need to be aware of the flu risk with swine. According to the U.S. Centers for Disease Control and Prevention, “While rare, influenza can spread from pigs to people and from people to pigs. When people get swine flu viruses, it’s usually after contact with pigs. This has happened in different settings, including fairs.”

The National Assembly of State Animal Health Officials and the National Association of State Public Health Veterinarians have published detailed guidelines for those involved in swine shows. It is titled Measures to Minimize Influenza Transmission at Swine Exhibitions, 2018, and is available on the website CDC.gov. It states, “More than 150 million people visit agricultural fairs each year in North America.”

The CDC tracks and documents cases of swine flu viruses infecting humans nationally. There are three swine flu viruses that have been found to infect humans. Called variant viruses, there is one that accounts for the vast majority of pig flu transmission to humans. It is called H3N2v.

According to the CDC, all three pig flu viruses “have been associated with exposure to swine at exhibitions.” The CDC further reports, “Between 2011 and 2017, 426 human H3N2v cases were reported from 18 states. The largest outbreak occurred in 2012 when a total of 309 human cases of H3N2v flu were identified, including 16 hospitalizations and one death.”