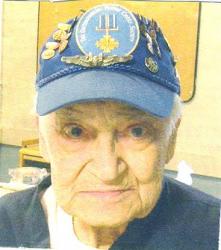 Alfred “Al” Dominic Aglialoro, 91, died Thanksgiving Day, November 23, 2017 at the Sulphur Veterans Center. He was a first generation Italian born in Brooklyn, New York to Rosario and Rosalina (Quallieta) Aglialoro. Of all the accomplishments Al had in his lifetime, he was most proud of the marriage to his wife Mary Proa Aglialoro on January 16. 2018 would have marked 64 years of marriage - together 67 years! His second greatest accomplishment was lectoring in the Catholic Church for over 40 years (between New Mexico and Sulphur, OK) Al was a devout Catholic. The Holy Name of Jesus was a central part of his life as well as his adoration of Mary, Our Blessed Mother of God. He loved the people of St. Francis Xavier Catholic Church located right here in Sulphur, OK. He looked so forward to leading the Rosary prior to Sunday Mass. Holy Day of Obligation Mass and Holy Week Masses. Al served honorably in the United States Navy as Seaman Second Class, the United States Air Force as Engineer Gunner (B-26) and the United States Army as Specialist Five-Training NCO & Reenlistment NCO. He instructed recruits on chemical, biological and radiological warfare. By direction of President Harry S. Truman, Al received the Distinguished Flying Cross Medal and 1 Air Medal with 2 Oak Leaf Clusters. He flew 50 bomb missions over Korea while stationed at K-8 (Kunsan, Korea) in 1952 on the B-26 he would affectionately refer to as, “D-Dawg”. He was a proud member of the 13th Bomb Squadron Association. Other medals received: Korean Service Medal, UN Service Medal, Asiatic Pacific Medal, American Theatre Medal, Victory Medal, Good Conduct with 2 Oak Leaf Clusters, Letters of Commendation, Letters of Appreciation, Expert Badge (Carbine) , Sharpshooter badge (Rifle) and Marksman Badge (Pistol .45). He was a radio announcer off and on in his life time, as well as a community baseball umpire. He had a beautiful singing voice and loved to sing (mostly in Italian to his wife Mary). He enjoyed going to the Artesian Casino and visiting all of his friends there throughout the years. Al wanted very much to always treat people fairly. He truly appreciated any kindness that was ever offered to him. Al’s greatest sorrows began with the passing of his father, Rosario and his mother, Rosalina. His first born daughter, Theresa Aglialoro died only three days after her birth. Al was the youngest of a family of eleven; he was the last one to pass away at the age of 91. Every time another sibling or family member passed away, his heart would break. In 1996, his 18-year old granddaughter, Charity Aglialoro passed away and in 2015, his 57 year-old daughter Lorraine Aglialoro (mother of Charity) passed away. He is survived by his wife of 63 years, Mary Aglialoro; daughter, Rosalina Aglialoro-Hoyle and husband George Hoyle, Jr.; two sons, Alfred P. Aglialoro and daughter-in-law, Cilia Aglialoro and Gary Aglialoro; grandchildren, Samantha Brasses and husband Ryan, Gian Carlo Aglialoro, Darla Smith and husband Sean Smith; great grandchildren, Sadie Marie Brasses, Walker Chase Smith; nieces and nephews and many, many friends. Services will be held at 11:00 a.m. Thursday, Nov. 30, at St. Francis Xavier Catholic Church officiated by Father Billy Lewis. Rosary and Reflection of Al’s life at 10:00 a.m. (prior to the funeral) Burial will be at Oaklawn Cemetery under the direction of DeArman Funeral Home. Pallbearers will be Alfred P. Aglialoro, Gary Aglialoro and George T. Hoyle, Jr. Memorial contributions may be made to Mr and Mrs Ryan Brasses, 11308 NW 100th Street, Yukon, OK. 73099 for Al/s great-granddaughter, Sadie Marie Brasses for her college fund Online condolences may be sent to www.dearmanfuneralhome.com