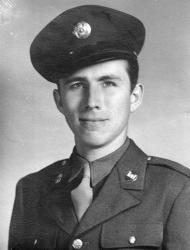 Services for Barclay P. Martin, 95, Sulphur, will be held at 1:00 p.m. on Thursday, Feb. 1 at the Sulphur United Methodist Church with Rev. P. J. Stewart officiating assisted by Rev. Jim Shepherd and Mike Martin. Burial will be at Rosedale Cemetery in Ada under the direction of DeArman Funeral Home of Sulphur. Born September 4, 1922 in Center, Okla., to Andrew J. and Sina Kathern (Anderson) Martin, he passed away Monday, Jan. 29 in Sulphur. He grew in the Fitzhugh area, graduating from Fitzhugh High School in 1940. Barclay met the love of his life, Elva Faye Oliver, and they were married on both of their birthdays, September 4, 1942 in Ada. She preceded him in death on Oct. 22, 2016. In 1943, Barclay was drafted into the U.S. Army and served during WWII in Italy and France. He came home in 1946 and they bought and farmed 220 acres near Stratford until 1956 when they came to Sulphur where they owned and operated Martin’s Produce until he retired in 1988. He was a member of Sulphur United Methodist Church. He was preceded in death by parents; infant son, Jerry Lynn Martin; one granddaughter; one brother and four sisters. He is survived by his sons and daughters-in-law, Barclay Martin, Jr. and Wynema, of Oklahoma City, Edward B. Martin and Elaine, of Bel Air, Md.; eight grandchildren, 16 great grandchildren; seven great-great grandchildren; brothers, Raymond Martin, of St.Louis, Mo. and Billy Sam Martin, of Gibbon, Neb. Military Honors will be held by the U.S. Army Honors Team. Online condolences may be sent to www.dearmanfuneralhome.com