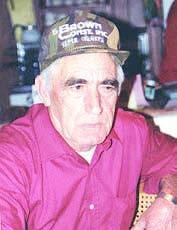 Funeral services for Buddy “BB” Britt will be held 2:00 p.m., Friday, Jan. 27, 2017 at the First Free Will Baptist Church in Sulphur with Pastors Jim Lawrence, Glen Kersey and Dick Terry officiating. Interment will follow at the Oaklawn Cemetery in Sulphur.

Buddy was born December 29, 1931 in rural Murray County, north of Sulphur, to the late Robert Eanes and Jewell Francis (Castleberry) Britt. He died Sunday, January 22, 2017 in Sulphur, at the age of 85 years and 23 days. Buddy and the former Ms Janett Reynolds were married on November 28, 1952 in Ardmore.

Buddy grew up in the Oak Grove/Hickory area where he attended school. Following high school, Buddy went to work with the railroad and later spent some time working in the oilfield. In 1963, Buddy began working for OG&E in the cross country construction department. While working with OG&E, he traveled throughout Oklahoma and Arkansas operating cranes and digging and setting poles. In 1989, after 26 years of service with OG&E, Buddy retired.

Throughout their 64 years of marriage, Buddy and Janett made their home in Sulphur until 1973, when they traveled and moved often with OG&E. In 1978, they settled in Calvin, OK, where they lived until his death. While living in Calvin, Buddy and Janett owned and operated the Calvin Quick Stop for three years.

Buddy cherished his family. He loved every minute he had being with them. He was known to spoil his grandchildren, yet was able to teach them many things they needed to know in life, such as how to cook and how to drive a vehicle. In his spare time he enjoyed gardening, hunting, fishing, cooking and telling ghost stories to his grandchildren.

In addition to his parents, Buddy was preceded in death by one brother, James Britt; and one sister, Rene Newell.

Service’s are entrusted to Hale’s Funeral Home of Sulphur.