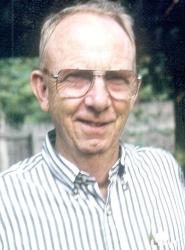 Services for Dale Harold Gilbert, 84, Sulphur, were held at 1:00 p.m. Friday, June 30, at First Pentecostal Holiness Church officiated by Rev. Mike Brown and Martin Gustin. Burial was at Oaklawn Cemetery under the direction of DeArman Funeral Home. Born October 4, 1932 in Drake to Knox and Dovie Eula (Hill) Gilbert, he passed away Monday, June 26, in Oklahoma City. Dale grew up in the Sulphur area, attending school at Drake and Nebo. He went with his brother to California before enlisting in the army where he served in Okinawa Japan during the Korean Conflict. After serving in the military, Dale returned to Sulphur where he married Judith Leonard on June 8, 1957. They moved to California in 1963 and returned to Sulphur in 1975. Dale then opened Dale’s Upholstery Shop which he operated for many years. His wife Judith passed away on October 31, 1980. Dale and Fredia (Brewer) Lancaster were married on June 1, 1985 in Sulphur and they had lived in Sulphur since that time. Dale was a member of First Pentecostal Holiness Church in Sulphur. He was also preceded in death by his parents; five siblings, Donnie, Delbert, Ozell, and Jerry Gilbert and Lorene Beaver; daughters, Becky Farmer and Terri Meeks. He is survived by his wife, Fredia Gilbert, Sulphur; sons and daughters-in-law, Victor and Farida Gilbert, Vancouver, Canada, Darrin Gilbert, Sulphur, Jerry and Sherrie Lancaster, Sulphur, James C. and Donna Lancaster, Sulphur; one sister, Analois Walker of Brigentine, of New Jersey; 10 grandchildren and several great-grandchildren. Pallbearers were Jeff Meeks, Jerry Lancaster, Jr., Josh Farmer, Chris Blackerby, Jeremy Lancaster, Randy Farmer, and David Meeks. Online condolences may be sent to www.dearmanfuneralhome.com