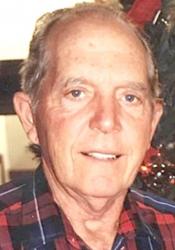 Dale Trueman Hines took his last breath upon this earth in Ardmore, Oklahoma, and his first in his new, heavenly home on Saturday, January 6, 2018. The service to honor his life will be Saturday, January 13, 2018, at 1 p.m. at Faith Center Church in Sulphur, Oklahoma with H. H. Davis, Dewain Duck, David Hines and Larry Landtroop officiating. Burial will follow at Claud Cemetery in Claud, Oklahoma. A businessman and general contractor, Dale built many homes in Sulphur and the surrounding area through the family business, Hines Construction. He was born to Henry Penn and Iris Viola (Buller) Hines in Levelland, Texas on October 11, 1932. As a youth he lived in many states across the country, as his parents pioneered Assemblies of God churches in places such as Arizona, Arkansas, Missouri, and New Mexico. He married his sweetheart, Melva Newman Hines, on February 27, 1955 at Velma, Oklahoma and moved to Laredo, Texas, where he served in the United States Air Force during the Korean War. The couple later settled with their three children in Reno, Nevada, where Dale worked in the sign industry, as well as construction. They moved to Sulphur, Oklahoma, in 1980 and served as faithful members of the First Assembly of God Church. Dale is survived by his wife, Melva, of the home; daughter Cynthia Hines of Sulphur; two sons, Richard Hines of Sulphur and Tim Hines and his wife Cindy, of Norman. Eight grandchildren were the sparkle in his eyes, including Sara Hawkins and husband Daniel of Phoenix, Arizona, Lyndsey Hines of Sulphur, Aubrey Kinat and husband Evan, of Katy, Texas, Ashley Hines of Sulphur, Marshal Hines, of Apache Junction, Arizona, Coley Hines, of Colorado Springs, Colorado, Lauren Hines, of Dallas, Texas, Derek Hines of Irving, Texas. Eight great grandchildren, Annabelle, Jude, Vivienne, Charlotte, Juniper, Jackson, Galexy and Russia, brought even more delight to their Papa. He is also survived by three brothers and wives, David Hines and Anna, Galen Hines and Margarett, Steve Hines and Sally; two sisters and husbands, Joyce Chancellor and Jack, Naomi Duck and Dewain. He was preceded in death by his parents, as well as brothers Lehmann and Maurice. Pallbearers will be Coley Hines, Derek Hines, Marshall Hines, Evan Kinat, and Daniel Hawkins. A military service will be conducted by the U.S. Air Force Honors Team. Memorials may be made in lieu of flowers in his honor to the First Assembly of God Church in Sulphur, Oklahoma through a fund set up at Vision Bank and contact, Beverly Vandagriff Online condolences may be sent to www.dearmanfuneralhome.com