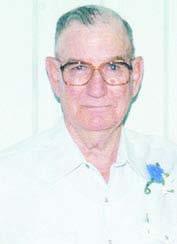 He married Lena Ruth (Smith) Binderim in Gainesville, Texas on December 15, 1945. “Short” grew up in the Buckhorn area, where he attended school. He had worked for Dolese and Murray County before going to work in maintenance at OSD, where he worked until his retirement.

Short enjoyed gardening, dancing and most of all his family. He attended the Baptist Church.

He was preceded in death by his parents; two sisters, Mary Dugger and Thelma Martin; one brother, Kenneth Binderim; a granddaughter, Jackie Ann; a great granddaughter, Timberly and a son-in-law, Dean Thomison.

Online condolences may be sent to www.dearmenfuneralhome.com