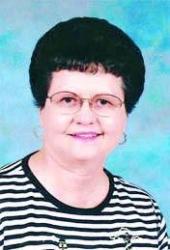 Services for Dorothy Lee (Beck) Hefley were held 10:00 a.m., Thursday, Jan. 26, at Hale’s Memorial Chapel in Davis with Pastor Tom Hefley officiating. Interment followed at the Green Hill Cemetery in Davis under the direction of Hale’s Funeral Home of Davis.

Dorothy grew up in the Woodland/ Davis area. She was the valedictorian of the 1955 class of Davis High School. Following high school, she attended college and majored in Education. Dorothy spent several years teaching school and working as an accountant in Quinlan, Texas, prior to returning to Davis in 2005. While living in Quinlan, she was very active with the Eastern Star, holding numerous offices throughout the club. Dorothy also served as the secretary/treasurer of the Woodland School Alumni Association for several years. In her spare time, she enjoyed reading, watching girls’ basketball and simply being with Jerry Don. Dorothy was a member of the First Baptist Church of Davis.

In addition to her parents, Dorothy was preceded in death by one sister, Betty Atwood and one brother, Ralph Beck.