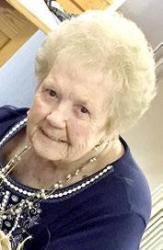 Dorothy W. (Deel) Lord, 80, Davis, was born August 11, 1937 in Sulphur to Clarence Douglas and Dollie Elmina (Hale) Deel. She died Tuesday, January 9, 2018 in Ardmore. Dorothy grew up in Fresno, where she graduated from high school. Later in life, she married Eugene Doyle “Whitey” Lord and together they owned and operated DC Cabinet Manufacturing in Castle Rock, Colo. for many years. Following Whitey’s death, she and her mother moved from Colorado to Davis, to be near family in 2010. Dorothy was an avid antique collector and enjoyed spending hours searching for the rarest antiques she could find. She also enjoyed spending time with her Oklahoma family. Survivors include one daughter, Sabrina Seanor and husband David of Hickory; sister-in-law, Marilyn Deel of San Jose, Calif.; one niece; two nephews and numerous local cousins within the Hale and Akers families. Dorothy was preceded in death by her husband, Eugene Doyle “Whitey” Lord in 2009; her mother, Dollie on August 5, 2017; father Clarence, in June, 1965; brother, Boyd Blaine “Sonny” Deel in 2014 and two uncles, John Elmer “Buck” Hale and David Eddie “Ed” Hale; and one aunt, Alta (Hale) Akers. No services are scheduled at this time. Arrangements are under the direction of Hale’s Funeral Home of Davis. Online condolences may be offered at halesfuneralhomes.com.