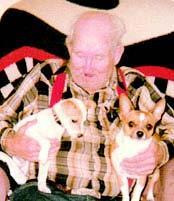 A. J. Hembree, a resident of Sulphur, was born April 29, 1929 in Allen, to Newt and Ella (King) Hembree. He passed away Wednesday January 4, 2017 in Ada, at the age of 87 years, eight months and five days. No services are planned at this time. He had lived in Wichita, Kan., before coming to Sulphur in 2012. A. J. was retired from school system of Wichita, Kan., where he had worked in maintenance. He had served in the U.S. Army and was a veteran of World War II. He was preceded in death by his parents; a son, Mark Alan Hembree and his wife of 53 years, Nina. He is survived by his special friend and companion, Melodye Erikson, Sulphur; two daughters, Regan Chamberlain, Sulphur and Candice Brinson, Sulphur; one son, Bradley Hembree, Wichita, Kan.; six grandchildren and two sisters, Ann Jeftrey, of Texas and Dee. Arrangements are under the direction of DeArman Funeral Home of Sulphur. Online condolences may be sent to www.dearmanfuneralhome.com