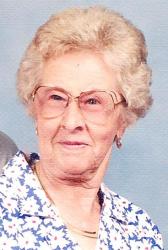 Services for Jessie Pearl Parsons, 90, Davis, were held 2:00 p.m., Tuesday, Feb. 27, at the East Main Church of Christ in Davis with Brother Jerrod Doss officiating. Interment followed at the Green Hill Cemetery in Davis under the direction of Hale’s Funeral Home of Davis. Jessie was born August 8, 1927 in Seminole County, to the late Charles and Minnie (Forte) Bray. She died Friday, Feb. 23, in Oklahoma City. Jessie and Jack Parsons, Jr. were married on May 11, 1946 in Seminole. He preceded her in death on December 26, 2003. Jessie grew up in the Seminole area, where she attended school. Early in her life, she spent several years working at the Seminole Bus Station. Following their marriage in 1946, they moved to New Mexico where Jack worked. Being that he worked in the oil industry, the family moved several times, making their home in various places in Texas, New Mexico and Oklahoma. In 1959, the Parsons moved to Davis where they raised their sons, Larry and Gary. For many years, Jessie owned and operated a beauty shop, within her home. Jessie was a very kind hearted, gentle lady. She was known for being an excellent cook, maintaining a beautiful yard and being a skillful gardener. Jessie was a faithful member of the East Main Church of Christ. Survivors include her two sons, Larry Parsons and wife Lori of Edmond and Gary Parsons and wife Winona of Davis; four grandsons; 11 great-grandchildren; three sisters, Ruby Heald, Betty Vanmatre and Darlene Underwood; and one brother, Franklin Bray. In addition to her parents and husband, Jessie was preceded in death by three sisters, Gladys Logan, Marie Davis and Blanche Bethany; and three brothers, Pete Bray, Jim Bray and Erwin Bray. Serving as pallbearers were Chad Parsons, Brandon Parsons, Dustin Parsons, Chayne Parsons, Brad Pletcher and Nathan Rhodes. On-line condolences may be offered at halesfuneralhomes.com.