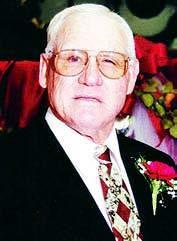 Funeral services for Joe Thomas Ayers were held 2:00 p.m. Tuesday, Nov. 29, 2016 at the First Baptist Church of Davis with Pastor Dale Ruggles, Pastor Willard McCartney, Jr., and Retired Oklahoma State Trooper, Roy Rogers, officiating. Interment, with military honors, followed at the Green Hill Cemetery in Davis. Joe was born Nov 4, 1931 in Davis to the late Jeff Morton and Jewell Dee (Meyers) Ayers. He died Thursday, Nov. 24, 2016 in Ardmore, at the age of 85 years and 20 days. Joe and the former Shirley Maxine Hale were married on May 15, 1959 in Marietta. She preceded him in death on Jan. 19, 1993. On Nov. 1, 1996, Joe and Dana (Brooks) Rose were married in Davis. Joe grew up in Davis and was a 1950 graduate of Davis High School. In January, 1952 he enlisted in the United States Army, serving during the Korean Conflict. He was honorably discharged from active service on December 2, 1953 and joined the Army Reserves, being fully discharged from the Army in February 1960. Joe spent several years working for Sun Drilling Company of Ardmore prior to his military service and immediately following his service. In 1967, Joe began a career in law enforcement with the City of Davis. Early on in his career, he left for a couple years and worked for Webb Construction in the oil field, only to return to law enforcement. Joe then spent 18 years with the Davis Police Department, retiring in 1988 as police chief. After retiring from Davis, he worked as a deputy for the Murray County Sheriff’s Department for five years, only to return to the Davis Police Department in 1995 as chief for a year. He again “retired” on Dec. 31, 1996 from the position of chief. Two weeks later, the new chief, Darryl McCurtain, hired him back as an officer for the Davis Police Department, where he spent an additional eight years as an officer, both in town and at Turner Falls Park. Following his final retirement from the Davis Police Department, Joe could not stay idle. He worked briefly for Wal-Mart and as a foster grandparent at the Davis Elementary School. In 2009, Joe returned once again to law enforcement and worked as a security guard at the Chickasaw Cultural Center in Sulphur, where he was working at the time of his death. Joe Tom Ayers was a very highly respected officer of the law not only by his fellow officers, but by the people he protected and served. He believed in the Golden Rule and that was exactly how he spent his years in law enforcement. He was fair and just. He ruled with authority, yet had compassion for everyone. In his spare time, he enjoyed being with family, buying and selling vehicles and collecting coins. In addition to his career in law enforcement, Joe spent 20+ years as a volunteer member of the Davis Fire Dept, seven years as a reserve deputy for the Murray County Sheriff’s Dept. and was a member of the First Christian Church of Davis. Survivors include his loving wife Dana and her family, which he dearly loved; four step-sons, Darryl Rose and wife Tricia of Wynnewood, Byron Rose and wife Bridgett of Columbus, Ohio, Glenn Rose and wife Alicia of Davis and James Rose and wife Dayna of Moore; 12 grandchildren, Rakel Rose, Jessica Davis, Jeremy Pearce, Justin Goodman, Ethan Rose, Keeley Rose, Hannah Rose, Megan Rose, Caleb Rose, Zackery Thomas Rose, Eric Rose and Danielle Rose; five great-grandchildren; one sister, Dorothy Shumaker of Davis; sister in law, Barbara (Hale) Beal; two brothers in law, Mack “Sonny” Hale and wife Carolyn and Glenn “Diddle” Hale and wife Judy, all of Dougherty; 10 nieces and nephews, Suzanne Patel and husband Yogi, Steve Shumaker, Eddie Mosley, Karen Sosebee, Shane Hale and wife Kim, Rhett Hale and wife Becky, Brandy Claxton and husband Keith, John Rheed Hale, Bree Roady and husband Justin and Sunee Lynn Gibson and husband Ryan; as well as several great nieces and nephews including Terra Parsons and husband Matt, Jeffrey, Kristi, Sierra and Sean Patel and Waymon and Lily Parsons. In addition to his parents and first wife, Shirley, Joe was preceded in death by his step-mother, Alice Ayers; one sister, Barbara Ann Ayers; niece, Candy Ayers and brother in law, John Shumaker. Serving as pallbearers were his nephews, Steve Shumaker, Yogi Patel, Jeffery Patel, Sean Patel, Eddie Mosley, Shane Hale, Rhett Hale and John Rheed Hale. Honorary bearers were Darryl McCurtain, Darryl Rose, Byron Rose, Glenn Rose, James Rose and his fellow officers of the Chickasaw Cultural Center. On line condolences may be offered at halesfuneralhomes.com. Services were “Entrusted To” HALE’S Funeral Home of Davis.