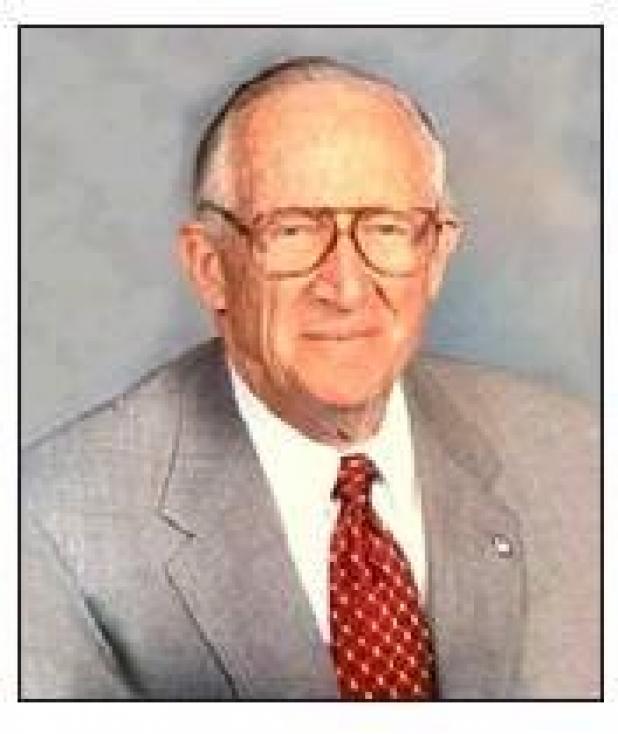 John Oliver Goffe, one of the last members of ‘The Greatest Generation,’ died on September 19, 2019 in Byron Center, Michigan surrounded by family after a courageous battle with Alzheimer’s Disease. He was born on September 22, 1924 in Sulphur, the second son of Paul Eckert and Adeline Dell (Krachy) Goffe. He was predeceased by his bride of 47 years, Jerushia Joyce (Herrod) Goffe, his parents, and brothers Paul Eckert Goffe, Jr. and William A. Goff.

John was an Eagle Scout, and as a high school basketball player was a member of the Platt All-Stars. He owned and operated a convenience store serving visitors to Platt National Park during his high school vacations. He graduated with the Sulphur High School class of 1942.

During World War II, he enlisted as an Infantryman and was assigned to the 346th Infantry Regiment, 89th Infantry Division. He later transferred to the Army Air Corps, earning Navigator and Aerial Gunner Wings. John was commissioned a 2nd Lieutenant and completed 19 bombing missions over Nazi occupied Europe. He served as a B-24 navigator with the 703rd Bombardment Squadron (Heavy), 445th Bomb Group (Heavy), 2nd Bomb Wing, 8th Air Force stationed at Tibenham, England. He earned the Air Medal with oak leaf cluster for valor in aerial combat, the European Theater of Operations Service Medal with three battle stars, and the World War II Victory Medal.

After the war, he used the GI Bill to earn a degree in geology at the University of Oklahoma where he was a member of the Lambda Chi Alpha fraternity. He was a lifelong fan of OU sports and ardent supporter of the Geology School--later employing numerous graduates.

Upon graduation from OU in 1949, he was employed by the Ohio Oil Company (later Marathon Oil) as an exploration geologist. This job took him to the four corners area of the American Southwest and later to Nebraska, Wyoming, Libya, Texas, Ohio, Louisiana, and back to Wyoming. In 1952, while in Nebraska, he met and married his bride, Judy. He was on the team that drilled the first exploration well in Libya, thoroughly changing the future of that country. He also was an oil finder working the Williston Basin, Deep Anadarko, and other plays. After retiring from Marathon in 1978, he joined Pogo Producing Company and opened and managed their office in Oklahoma City. With Pogo, he realized a lifelong professional goal by becoming an officer of a New York Stock Exchange listed company. Visitors to Oklahoma City can see the results of his efforts when flying in and seeing oil wells between the runways of Will Rogers World Airport. He retired from Pogo in 1986 and he and Judy stayed in Oklahoma City and enjoyed an active social life with many friends. Staying close to his roots in Sulphur, OK, he organized numerous high school reunions. In 2016 he moved to Michigan to be closer to his daughter.

John enjoyed playing golf and began journaling his life long before it became popular. Along with Judy, John was an avid traveler and photographer. Their wanderlust began in the late 1950s after living in Libya and their travel through Europe on the way back to the U.S. He visited all 50 states, more than 70 countries, and every continent but Antarctica. He was humble, self-effacing, and affable to the end. Many remarked upon his kindness and fairness.

John is survived by his two sons, Dr. William L. Goffe of State College, PA and Tom and Sheila Goffe of Smithfield, NC. He is also survived by his daughter, Mary J. (Goffe) Cook, her husband Lee H. Cook and their three children, Alexander J. Cook, Brian T. Cook, and Elizabeth A. Cook.