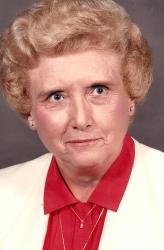 Services for Johnnie Lucille Gatlin Thomas will be held at 2:00 p.m., Wednesday, March 7, 2018 at the Chapel of Crossway Baptist Church officiated by Rev. Bill Leveridge. Burial will be at Oaklawn Cemetery under the direction of DeArman Funeral Home. Johnnie was born November 20, 1921 in Spaulding, Oklahoma to Lon & Ollie (James) Gatlin. She left her earthly home March 3, 2018 in Sulphur at the age of 96 years, 3 months and 7 days. She moved to Murray County in 1924, living in the Hickory Community. She entered school at Hickory in 1927 at the age of five, graduating in 1938, at the age of 16. Johnnie attended East Central University, earning both a Bachelor and Master’s Degree, with majors in English and Elementary Education. She married Daniel Mearl Thomas on July 11,1941. Mearl entered the U.S. Army in June 1942 after receiving a letter from his “Uncle Sam” inviting him to join the war. Johnnie began her teaching career at Mannsville, Carter County, Oklahoma when Mearl was overseas engaged in the war effort. After Mearl returned home, Johnnie began teaching at the Oklahoma School for the Deaf in 1947 and taught there until her retirement in 1983. She began as a Kindergarten teacher and was in that position until 1975 when she became the supervisor of the Elementary Education Department. Johnnie was a member of Murray County Retired Teacher’s Association and served as secretary and treasurer for many years. She was also a member of the Oklahoma Retired Teacher’s Association, Arbuckle Historical Society, Crossway Baptist Church, and the Amateur Genealogical Society. Johnnie was an avid reader in her retirement years. When she didn’t have anything to read she would get out paper and pencil and write down the 50 states and their capitals as well as the 77 counties and county seats in Oklahoma. She had a thirst for knowledge and imparting that knowledge to others. She never stopped learning or teaching. Johnnie and Mearl loved to travel by car, especially to Branson, Mo., and it was often said that Johnnie and Mearl were “on the road again.” The Thomas family started attending First Baptist Church in 1948 and became members in 1952. Johnnie was a Sunday School teacher in the Adult and Deaf departments at First Baptist Church for 30 years. She was preceded in death by her parents;, her husband, Mearl in 2006; sisters, Lahoma South, Melva Essary, Othell Gatlin and Loretta Drake and one brother, L.D. Gatlin. She is survived by her daughters and sons-in-law, Susie Krogh and John, of Sulphur, Kathy Viehouser and Darrell, of Coeur d’ Alene, Idaho; four grandchildren and spouses, Darold Lathum and Penny, Dana Seaman and Eric, Dr. Marta Krogh, Amanda Wood and Jason; five great grandchildren, Alex Lathum, Tyler Lathum, Tanner Seaman, Wyatt Seaman, Baisley Seaman; three great-great grandchildren, Aeva, Baker and Chloe Lathum; one brother and his wife, Pete Gatlinand Barbara, of Meridan, Okla.; two sisters, Willa Dean “Bill” Hicks, of Pauls Valley, Brondell Nelson, of McLoud; and a brother-in-law, Bob Essary, of Sulphur. Johnnie wrote this obituary herself many years ago. Pallbearers will be David Lathum, Tyler Lathum, Harvey Stinson, Tim Howe, Joe Caudle and Keith John. Donations may be made to the Retired Teacher’s Scholarship Fund, The Historical Society of Sulphur or Crossway Baptist Church. Online condolences may be sent to www.dearmanfuneralhome.com