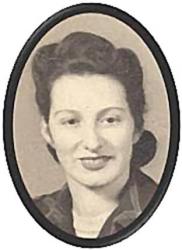 Funeral services for Mary Acencion Stephens will be held 2:00 p.m., Friday, January 26, 2018 at the Dougherty Baptist Church with Pastors Willard McCartney, Jr. and Eddie Dye officiating. Interment will follow at the Dougherty Cemetery. Mary was born May 25, 1922 in Easton, MA to the late Manuel & Rosa (D`Canbra) Gomes. She died Tuesday, January 23, 2018 in Sulphur, at the age of 95 years, 7 months & 28 days. Mary grew up in Brockton, MA. In 1943, this sweet, beautiful, naïve, devoted catholic girl crossed paths with a devilishly handsome, rowdy serviceman, named David Stephens. Shortly after their meeting, they married in Tallahassee, FL. Following their marriage, the young bride moved to Dougherty, where she waited patiently for to David to complete his service with the United States Army. Throughout their marriage, they made their home in the Dougherty/Drake areas where she raised her children. Mary spent several years working as a cook at the Goddard Youth Camp, as well as working several years for Stromberg-Carlson in Gene Autry. Mary was a very devoted Christian lady. Her faith was steadfast and her love for the Lord was evident. She was very faithful with her attendance and tithes to the church. Mary was one that had her priorities right in life. First and foremost was Jesus Christ, with her family being next. She was a loving mother and grandmother, cherishing her time with each of them. Mary was a very crafty lady. She enjoyed crocheting, quilting, painting and pottery. She also loved singing old hymns with family and friends. Survivors include four sons, Danny Stephens and wife Betty of Sulphur, Thomas Stephens and wife Linda of Mill Creek, Terry Stephens of Dougherty and Tony Stephens of Sulphur; 18 grandchildren and numerous great and great-great grandchildren; as well as one sister, Lee Gomes. Serving as pallbearers will be her grandsons. In addition to her parents & husband, Mary was preceded in death by two daughters, Donna Clagg and Mary Ann Hensley; two sons, Joseph Frank Stephens and Baby Boy Stephens; two grandchildren, Tammie Binderim and Blake Clagg; as well as one brother, Freddy Gomes. Services are “Entrusted To” Hale’S Funeral Home of Sulphur, OK. On-line condolences may be offered at halesfuneralhomes.com.