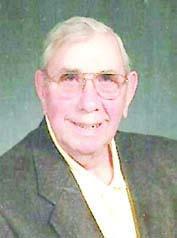 He attended Sulphur schools and was in the U.S. Army from 1951 to 1953, serving during the Korean War. He married Reba Huffines Blackburn August 19, 1955 and they have three children, Karen, Rob, and Kristi. He has two grandsons, Cole and Blake Hogg.

He was preceded in death by both his parents, three brothers, Joe, Jack and Gene and two sisters, Kathleen and Wenona.

He is survived by his wife, Reba, of the home, three children, Karen Moore and husband Wayne of Ardmore, Rob Blackburn and wife Redonna of Sulphur and Kristi Blackburn of Edmond; his two grandsons, Cole Hogg of Tulsa and Blake Hogg and wife Melanie of Ardmore; three great grandchildren, Addison, Brody and Emerson Hogg; three siblings, Dan and Wayne Blackburn and Rhonda Davidson as well as several nieces and nephews.

He was a member of the Calvary Baptist Church. He was a 70-year member of International Brotherhood of Electrical Workers joining in 1946. He worked as a journeyman electrician for over 40 years. He worked across southern Oklahoma on jobs like the Uniroyal plant in Ardmore, the cement plant in Ada, the prison in Lexington, and the Nature Center in Sulphur. He spent his last 10 years working at the Sulphur Veterans Center where he retired as the Maintenance Superintendent in 1994.

He was a member of the Masonic Lodge #144 and was a Master Mason and a 32nd degree Scottish Rite mason. He was an avid hunter and fisherman. He trained and had birddogs most of his life and many of his best friends were those he’d hunted and fished with since childhood. He often recalled times camping along and fishing in Rock Creek with his brothers when they were young. As much as he loved hunting and fishing, his true passion was trading. His trading skills were learned early in life and he rarely made a bad trade. Whatever he collected, he researched and became a subject matter expert on it. A few of his interests included McChesney spurs, antique furniture, fiddles, Gibson guitars, Ford Mustangs, Ford Broncos, old tools, locks, fishing lures, and pocket knives. He even pursued bee keeping for a few years. But, he enjoyed collectible guns more than anything… especially Winchesters and Remingtons.

He was interested in all kinds of western antiques and liked western movies and books. He always preferred something old to something new. He went to the “dog trade” every Sunday for years and years. When he was asked if he went to the dog trade on Sunday, he would respond with, “Did the sun come up?” It was common for him to buy something one week at the dog trade only to sell it for a profit there the next week. His normal greeting to his brother, Gene, was, “What are you trading on?” He routinely made very good trades. He never paid the asking price for anything. He often said everything he had was for sale for the right price. His motto was buy low, sell high. He passed his love for trading on to his son and grandsons. He rarely had one of anything. He loved country music and learned to play the guitar in his 70’s. He enjoyed Blue Grass music and he and his wife often took trips to Blue Grass festivals which were some of their best times together. He loved his friends and his family. He went to the coffee shop every morning to catch up on the happenings around town and to see his buddies each day. He also went to the bank in the mornings to see and harass the bank girls. He loved his wife, kids, grandsons and great-grand babies dearly. He always had time to fix a flat tire on a bicycle when they were growing up. He gave them all whatever he might have they wanted or needed. Mostly, he gave them love and sense of security for which they are so very thankful. His greatest joy was to have the whole family for dinner and visit. He loved well and was well loved. He will be missed deeply until the day his family is reunited in heaven.

Funeral services were held 2:00 p.m., Monday, November 7, 2016 at the Calvary Baptist Church in Sulphur with Pastor Bill Leveridge officiating. Interment will follow at the Oaklawn Cemetery in Sulphur.

(This obituary was lovingly written by the family of Robert “Moe” Blackburn.)

Services are “Entrusted To” Hale’s Funeral Home of Sulphur.