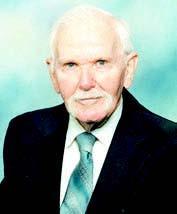 A memorial service for Rolland Vernon Benson, Sr., 94, of Allen, will be at 1:00 p.m. on Thursday at the Criswell Funeral Home Chapel in Ada, officiated by Deacon Dennis Fine.
Mr. Benson passed away Monday, November 7, 2016 at Arbuckle Memorial Hospital in Sulphur. He was born on May 10, 1922 at Pullman, MI to Walter Washington and Alvira Mae Hayes Benson. He attended school, married, and raised a family in Michigan before moving to Allen in 1983.
He married Carlene Ellen Stephan on October 5, 1946 in Jackson, MI. Mr. Benson was a machinist and inspector for Hayes-Albion Corporation in Jackson until his retirement. He served in the U. S. Army from December 10, 1942 until being honorably discharged December 5, 1945. He was a combat infantryman during World War II. He received the World War II Victory Ribbon, Purple Heart, two Bronze Service Stars, American Theatre Ribbon, Good Conduct Medal,Combat Infantry Badge and Bronze Star. Mr. Benson was a member of the Veterans of Foreign Wars #11194 and the Disabled American Veterans.
Survivors include his wife, Carlene, of the home; sons, Rolland V. Benson, Jr. and wife Debbi of Parma, MI, and George A. Benson and wife Vicky, Sacramento, CA; his grandchildren, Scott Benson and wife Kris and Paul Benson and wife Jamie both of Jackson, MI, Michelle Benson Kim and husband Dr. Joon Kim of Phoenix, AZ, Joseph Benson of Los Angeles, CA, Benjamin Deverman and wife Saina of California and Jason Deverman of Jackson, MI; five great-grandchildren; and one great-great-grandchild.
He was preceded in death by his parents; half-brother, Clarence Benson and wives Lola and Thelma; and a daughter, Frances Eilene Benson.
Obituaries may be viewed and online condolences sent to criswellfh.com.