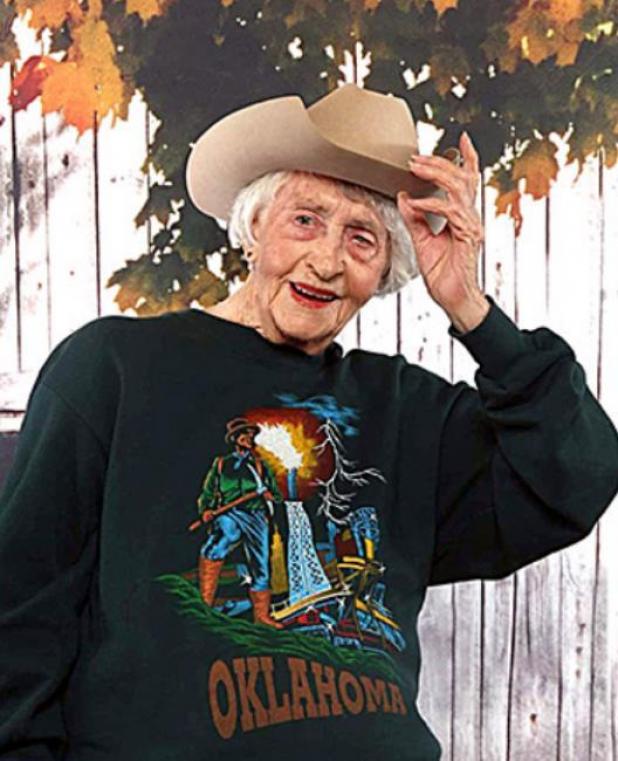 Ruby Lee (Renegar) Beasley was born on November 6, 1910, north of Caddo Creek near Ardmore, Oklahoma. Ruby passed away on January 8, 2021, shortly after 11:00 p.m. in Sulphur, at the age of 110 years old. Ruby was living independently at her own home in Sulphur, just before her death.

Since Ruby was old enough to pick up a one-row planter (about age 2) she was deemed “Dad’s Cowboy.” Ruby grew up with her four sisters on the Renegars’ Bar S Ranch in Nebo, Oklahoma. As Dad’s Cowboy, Ruby would start every day around 4 a.m. to get the fire going in the kitchen and prepare breakfast for the two of them so they could feed all the cattle before school. Just afterwards she and her sisters really had to “step to it” to get to school on time each morning, which was about a mile from their home. After school, they all rushed back home to ensure all their chores were done before the sun set.

Ruby attended Nebo school until the 9th grade. She had four children in Ardmore, Oklahoma with her first husband, Frances E. Butler. She later re-married George Beasley, on August 26, 1946. Ruby and George lived in San Antonio, Texas where they owned a dairy farm with 95-head of cattle until 1979. The couple then retired to Sulphur, where Ruby lived until her passing at age 110.

As a Supercentenarian and local celebrity, she was often asked, “what is the key to a long life?” to which she would look at the question-seeker as if they should already know the answer and reply: “Well… I’ve done a man’s work all of my life…since I was big enough to reach up and hold a one-row planter.” Ruby was frequently referred to as the “lady who always wore red boots and a cowboy hat” around town. She would often tell her children and grandkids that she dressed that way so “that people will think I’m a man, you see” in order for others to never consider her as vulnerable. Fiercely independent her whole life, Ruby also proudly mowed her own lawn, until she was close to 105 years old, which was no easy task. She recently even commented to reporters during a 110th birthday interview, “I’d keep mowing it too, if my family would ever just see to my mower.”

Graveside services will be held 2:00 pm, Friday, January 15, 2021 at the Drake Cemetery, south of Sulphur. Dru Finley, of First Baptist Church Fusion in Ardmore, will officiate the service. Masks will be required, and social distancing is strongly encouraged.

The family wishes to offer a very special thanks to the family and friends who enabled Ruby to continue living in her home for so long, including but not limited to Brian and Debbie Hollis, Mark and Linda Estlack, Hal Burns, her former Postman, Bill Wright, Sherry Smith and the other health care providers from her home health network.

Services are entrusted to Hale’s Funeral Home of Sulphur.