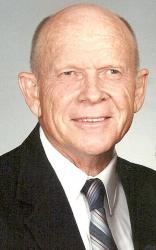 Silas Marvin Grider, 98, passed away on November 24th, 2017. He was born May 26th, 1919 to the late Pinkie Ellen Cox Grider and Marvin A. Grider. He entered this world in Murray County, OK and left this world in Murray County, OK, while at a Davis High School football playoff game. Si, a member of the greatest generation, was born in Oklahoma to farming parents who instilled in him the best values of faith in Christ, honesty, and hard work. These values served him well as he graduated from Sulphur High School a year early and then put himself through Oklahoma A&M College (Oklahoma State University). With the possibility of war looming in the minds of our nation, Si volunteered his service with the U.S. Army Air Corps and began his training as a pilot in San Antonio, TX at Kelly Air Field. While in San Antonio, Si met the love of his life, Kathryn Florence Huskey. They were married there and would eventually bring 5 children into this world. After serving as a B17 & B24 pilot during WWII and surviving being shot down in the Bay of Biscay, Si was awarded the Purple Heart for injuries sustained during five days at sea. He also received The American Defense Service Medal, The Air Medal with 3 Oak Clusters, EAME Campaign with 1 Bronze Service Star, and The American Theater Campaign Medal with 2 Bronze Service Stars. After the war, Si continued his education at Texas A&M University from where he would launch his career in agriculture, eventually concentrating his efforts promoting American rice in foreign markets. His tales of world travels entertained friends and family alike. Retirement from the rice markets gave him and Kay the opportunity to start a new life in the Paris, TX area. His interest in land and farming encouraged a new chapter of focus and accomplishments. Throughout all of his ventures and adventures, one thing remained constant…his commitment to the Lord. His faithfulness in church and to the study of the Word was a source of encouragement to so many. His most heartfelt desire was to see those he loved in heaven. Si is preceded in death by his parents, brothers, Frank, Oscar, and J.T. Grider, son in law Gary Eldridge and grandson Michael Self. Survivors include: wife Kathryn Florence Grider, brother, Roy Grider of Perkins, OK, son, James (Jim) Marvin Grider and wife Teri of Arthur City, TX, daughters, Annette Barfield and husband Billy Joe of San Antonio, TX, Janie Abell and husband Tom of Farmersville, TX, Leann Eldridge of Wharton, TX, and Eileen Corbett and husband Gary of Willis, TX, 14 grandchildren and 19 great grandchildren along with numerous nieces and nephews, cousins and a host of other family and friends.