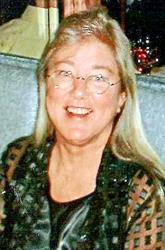 Memorial services for Vicki P. Graham, of Madill, will be held at 1:00 p.m. on Thursday, July 5, at New Beginnings Church in Madill, with Pastors Don, Martha, and Travis Williams officiating. DeArman Funeral Home of Sulphur is in charge of the arrangements. Online condolences may be sent to www.dearmanfuneralhome. com. Born April 2, 1944, in Oakland, California, to George S. and Lenell (Gillaspie) Portman, she passed away Wednesday, June 27, 2018, in Madill, at the age of 74 years, 2 months, and 25 days. She married to Roger Graham in Williamsburg, VA, on September 17, 1978. Vicki grew up in Sulphur, and moved to the Martha/Blair area in 1956 where she graduated from Blair High School in 1962. She graduated from Oklahoma State University in 1968 with a Bachelor of Arts degree in English Literature. In 1988, she graduated with a Master of Science Degree in Psychology from East Central University. Vicki was a journalist and Christian author. She authored A Breath of Kindness (Garborg’s/DaySpring, 2002) and wrote and photographed A Taste of Carthage: Good Food, Memories, and Southern Hospitality from Al Gore’s Hometown (Rutledge Hill Press, 2000). Vicki also contributed her sharp research and writing abilities as coauthor of Laughter in the Dark with Chonda Pierce (Simon & Schuster, 2007), compiler/rewrite editor of Sanctuary by David Jeremiah (Integrity, 2002), compiling editor of Day by Day with Charles Swindoll (W Publishing Group, 2002), researcher/writing contributor for the Let There Be Laughter series and the When Miracles Happen series (Guideposts Books, 2003–2008), and ghost writer of Love Notes from God for Busy Moms by Helen Young (Tyndale, 2004). Vicki’s experience also included 14 years as a newspaper reporter and editor for The Daily Olympian (Olympia, WA) and The Virginia Gazette (Williamsburg, VA). While living in Sulphur, she served a term as the mayor of Sulphur and spent 1+ years as a counseling psychologist. In 1999, Vicki retired to Lake Texoma with her husband, Roger, where she served on the Library Council and attended the New Beginnings Church. Vicki was preceded in death by her parents; her husband, and her son, Nik Kelly. She is survived by her daughters and sons-in-law, Kristi Wade and David, of Lake Texoma, Jody Inchausti and Ron, of Huntington Beach, CA; daughter-in-law and her husband, Elayna Kelly-Duncan and Tim of Roanoke, TX; son, Jason Graham and his wife, Sue, of Corpus Christi, TX; seven grandchildren, JT Wade, Kelly Wade, Bella Inchausti, Corbyn Kelly, Nikolas Kelly, Bryan Graham, and Kyle Graham; one great-grandchild, Parker Wade; brother and sister-in-law, Sam Portman and Jane, of Estes Park, CO; and sister-in-law, Kathy Crumrine, and her husband, Keith, of Ellensburg, WA; and her best friend of 72 years, Charlotte Greeson of Bedford, TX. Vicki was rarely seen without one of her signature OSU orange shirts. She was a woman of great faith and an avid reader. She loved and was loved by her family, friends, and community