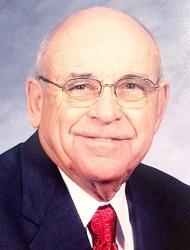 Services for Welcome Thomas “W.T.” Young, 87, Davis, were held 11:00 a.m., Saturday, June 24, at the First Baptist Church of Davis with Brother Johnny Tohnika officiating. Interment, with military honors, followed at the Green Hill Cemetery in Davis under the direction of Hale’s Funeral Home of Davis. Born September 1, 1929 in Davis to the late Floyd Henry and Mary Elizabeth (Ware) Young, he died Thursday, June 22, in Sulphur. W.T and the former Ms. Geneva Delcine Gilbert were married on July 12, 1952 in Davis. W.T. grew up in Davis, graduating from Davis High School in 1948. He joined the U.S. Navy on June 28, 1948 in Oklahoma City, serving during the Korean Conflict. After being honorably discharged on June 24, 1952, he returned home to Davis. Throughout his working career, W.T. worked for Wonder Bread for some 15+ years, spent several years driving a truck cross country for LeeWay Motor Freight and in sales at Fred Jones Motors in Oklahoma City. In 1995, he and Delcine moved back to Davis to enjoy their retirement years. W.T. was a very devoted Christian, serving as deacon in several churches, with the most recent being the First Baptist Church of Davis. He truly had the heart of a servant. He and Delcine were always ready to assist the church in any way to help share the word of Jesus Christ. W.T. loved traveling across the U.S. with Delcine by his side. He also enjoyed reading and tending to his perfectly manicured yard. Survivors include his loving wife, Delcine; two daughters, Glenna Young-Raper and husband, Jerry of Davis and Jill Day and husband, Roger of Ardmore; five grandchildren and four great-grandchildren. In addition to his parents, W.T. was preceded in death by one daughter, Karen Lynn Young-Horne; and one brother, Jackie Floyd Young. Serving as pallbearers were Dusty Raper, Justin Day, Brandon Blakeburn, Nick Denewellis, Bruce Gibson, Brent Gee and Greg Parker. Online condolences may be offered at halesfuneralhomes.com.