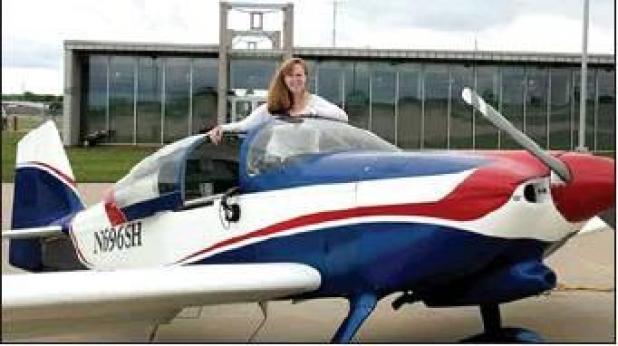 Lt. Col. Deirdre Gurry completed her personal mission to fly into all 108 public-use airports within the Oklahoma Airport System (OAS).

Pilot Flies To All 108 Airports In State

In pursuit of general aviation, Gurry purchased an RV6 aircraft a little more than a year ago. Itching for an aviation adventure, it was mid-winter when she began looking for a goal to keep her busy. She said the idea came to her when she received the 2018 Oklahoma Aeronautics Commission (OAC) official aeronautical chart during the Oklahoma Women in Aviation & Aerospace Day event held in Tulsa.

Gurry’s journey launched this past December and was fulfilled April 24th at Duncan’s Halliburton Field (KDUC). Over a four-month period, she took nine day-trips with the Oklahoma Panhandle being her longest.

“I enjoyed finding buildings with paintings on the roofs. It’s fun to think about the people who leave the art just for us pilots to find! I’ve seen an eight-ball, a smiley face, and even a rooster!” said Gurry. “One thing that was a small, but fun, challenge was transiting between the airports that were very close. I would only do one “touch and go” or “low approach” to wet grass fields, and then move on to the next. With some airports very close, switching frequencies, finding the airport, and scanning for traffic kept me on my toes.”