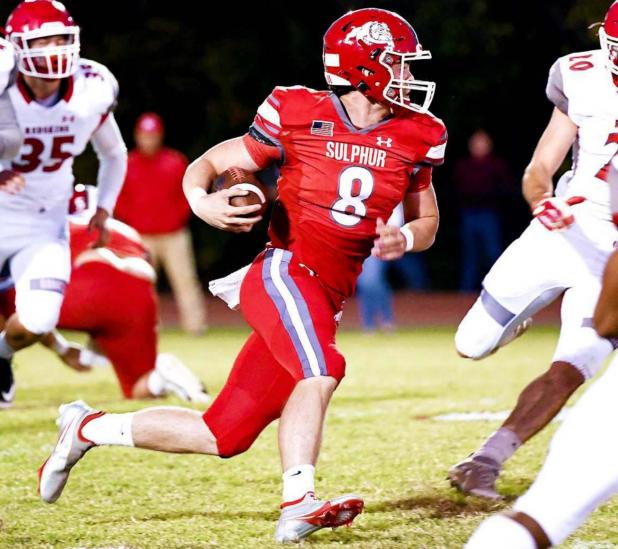 Sulphur quarterback Reese Ratchford sprints around end in last Thursday night’s loss to Kingston. The Sulphur junior had a big night with 112 yards in passing and 61 rushing yards. PHOTO BY SABRINA DUCK 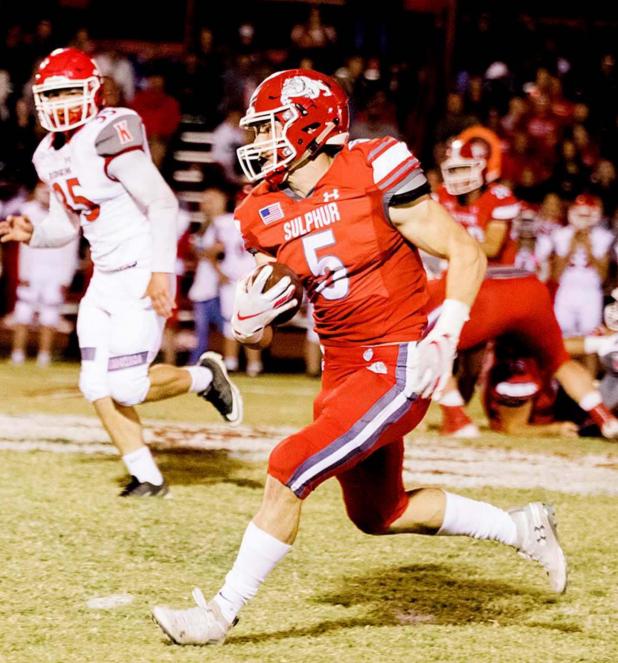 Sulphur running back Logan Smith (5) blows past several Kingston defenders in a big play for the Dogs. Smith had several big rushing plays in the loss. PHOTO BY DEJAY ARMS 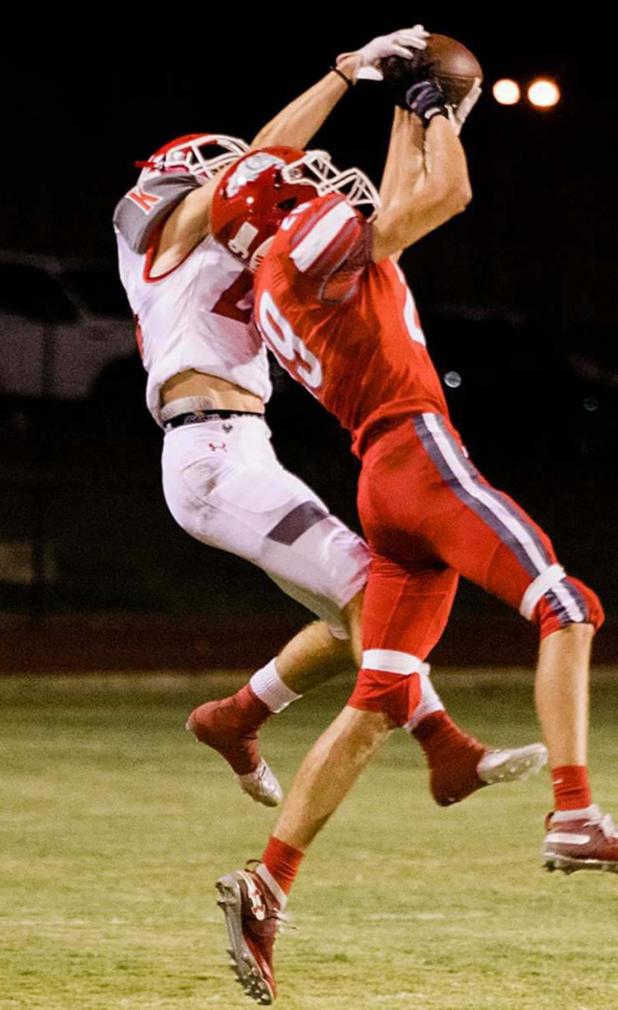 Turnovers plagued the Dogs again last Friday, as they fell to Kingston 30-26 at Agee Field in a key district contest.

The Dogs (4-3, 3-1) turned it over three times and Kingston scored a late touchdown to go ahead, all but clinching the district title.

The story was the same for Sulphur, as turnovers were again the difference in the loss, which has been the case in all three defeats this year.

“You just cannot turn the ball over three times,” Sulphur head coach Jim Dixon said. “It was without a doubt the difference in the game.”

The Dogs out-gained Kingston in total yards and Sulphur racked up 296 rushing yards, but squandered opportunities to cash in, while Kingston only turned it over once.

“They only turn the ball over once and that’s a huge difference,” Dixon said. “We moved the ball up and down the field on them and our offensive line blocked great. We had no problem with them up front, but you can’t beat yourself.”

In the three losses for Sulphur in 2020, the Dogs have turned the ball over 11 times. In the four wins, Sulphur has just one giveaway.

Sulphur took a 26-23 lead with 6:38 to go in the game when senior Logan Smith broke a tackle near the line of scrimmage and raced 80 yards for his 3rd touchdown of the night.

But Kingston had one more long drive in them.

The Redskins drove 77 yards in 11 plays, scoring on an 8-yard touchdown by Brandon Watson to make it 30-23 with 1:34 to go, which was the game-winning score.

Things were made even tougher for Sulphur when junior quarterback Reese Ratchford left the game early in the fourth, being carted off.

The team learned late Friday night that Ratchford’s season was over after a broken leg and dislocated kneecap.

“It’s a shame for him,” Dixon said. “He was having a great season and was doing a great job for us on both sides. He had come a long way as a passer and is a great runner. And was playing well on defense too. He had really developed into a leader for us.”

After a couple of stalled drives, including a tipped pass at the line that resulted in an interception inside the Kingston 25, the Dogs caught a break on special teams.

Smith boomed a punt deep into Kingston territory and the Redskins return man fumbled it. Ratchford pounced on it after racing down in coverage and the Dogs were in business at the Kingston 15.

The Dogs needed just one play to make it 7-6, as Ratchford faked to Smith, rolled right and found Ko Withrow in the flat for the pass and catch score with 1:11 to go in the 1st.

Sulphur forced a three-and-out and got the ball back inside the Kingston 30.

But Ratchford was sacked and the ball came loose as he dropped back to pass, as Kingston picked it up and ran it back to the Sulphur 23, a huge swing in momentum.

“Those are just the mental mistakes and miscues you can’t have,” Dixon said. “We have to do the little things right in close games if we want to win.”

Kingston scored five plays later, on 4th and 9 from the 22, as the pass was deflected into the air by a Sulphur defender and fell into the arms of a Kingston receiver, who ran it in for the score with 8:09 to go in the 1st half.

Each team traded possessions until the break and it was 13-6 Kingston at half.

The Dogs got started quick in the 3rd quarter, as they needed just seven plays to go 70 yards to take a 14-13 lead.

The Sulphur defense forced a quick three-and-out and the Dogs got it back at their own 28.

Sulphur again marched right down and scored, needing just six plays to cash in, as Smith scored again from two yards out to make it 20-13 Sulphur with 5:57 left in the 3rd.

On the ensuing possession, Ratchford was picked off on just the second play, giving the ball back to Kingston with the game tied.

Kingston would stall, but found a way to still get points, as they knocked home a 32-yard field goal to take the lead 23-20 with just over 10 minutes to play.

“I told our kids that we have to rebound and get tough,” Dixon said. “We can play with anyone in our class. But we have to focus and cut out the little mistakes and in big games and crucial moments, execute and hold onto the ball.”

Smith had another monster game, running 24 times for 230 yards and three scores.

Ratchford was 6-of-14 passing for 104 yards. He threw the score to Withrow and was picked off twice. He also added nine carries for 53 yards.

The Dogs are back in action this Friday when they travel to Dickson for another district contest.