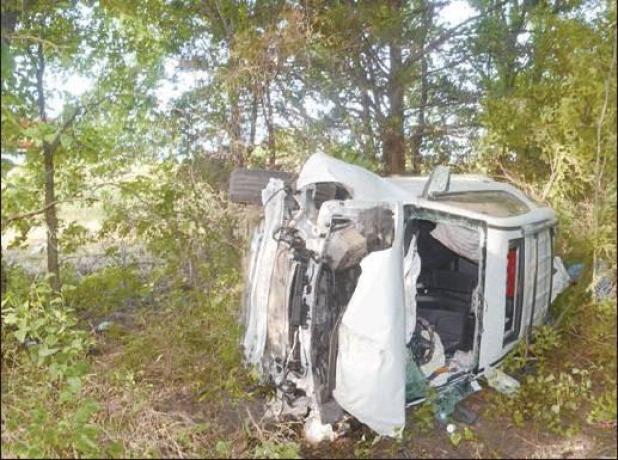 A Sulphur woman, Amber N. Stephens, 25, was killed when this SUV went airborne off of S.H. 7 last Sunday and crashed into tress on the north side of the road. Stephens, who was a passenger in the vehicle, was pronounced dead at the scene by Murray County Ambulance personnel. The accident happened near the Sandy Creek Bridge, about 1.7 miles west of the city limits.

A Sulphur woman became the fifth victim in a deadly week on area roads after she was killed in a one-vehicle, roll-over accident last Sunday.Troopers said the crash happened about 7:24 a.m., 1.7 miles west of Sulphur on S.H. 7.

According to the patrol, Amber N. Stephens, 25, was pronounced dead at the scene of the accident, just east of the Sandy Creek Bridge.

Troopers said Stephens was a passenger in 2012 Chevrolet Equinox, driven by Chenoa R. Imotichey, 26, Davis. Imotichey was taken by Murray County EMS to Arbuckle Memorial Hospital and later airlifted to OU Medical Center where she was admitted in serious but stable condition with trunk and internal injuries, according to the patrol.

While many aspects of the crash remain under investigation by the Traffic Homicide Division of the Oklahoma Highway Patrol, a witness to the crash who had just turned onto S.H. 7 from Kirby-Graves Road, said a white SUV approached her from the rear, then passed her vehicle, continued on westbound where it went off the road to the right, went down an embankment, then up another embankment and then went airborne into a grove of trees on the north side of the road. The vehicle then rolled an unknown number of times, coming to rest on its side.