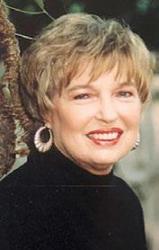 A graveside service for Beverly Barron McFarland, 83, the mother of Sharon Chadwick of Davis, was held 2:00 p.m., Tuesday, Feb. 6, at Duncan Municipal Cemetery. Mrs. McFarland was born Sept. 30, 1934, in Duncan and died Jan. 31, 2018, at Pauls Valley Care Center from complications of Lewy Body Dementia. She worked with her daughter and granddaughter at The Davis News for over 20 years before her health declined in 2014. Before moving to Davis, she was a market research assistant with Halliburton Services in Duncan. She wrote that she would like to be remembered for the caring and compassion she had for her family, her fellow man and anyone in need. She was happiest when helping others, and this continued during her three years at Wynnewood Care Center. She was preceded in death by her parents, Geraldine (McLendon) and Orvis H. Lowry, her son, Barron Kent Ratzlaff, in 2015, and her granddaughter, Alesha Henley in 2013. Her survivors include her daughter, Sharon and her husband, Richard Chadwick; her daughter-in-law, Debbie Ratzlaff of Wylie, Texas; five grandchildren, Tamara and Kristina Ratzlaff, Kris and Kevin Koller, and Grant Henley, and five great-grandchildren. Donations in her memory are suggested to the DOAV Cat Shelter, named in memory of her granddaughter, Alesha, 622 Oaklawn Rd., Sulphur, the Davis First Methodist Church building fund or the American Cancer Society. Hale’s Funeral Home of Davis was in charge of arrangements. Online condolences can be offered at halesfuneralhomes.com