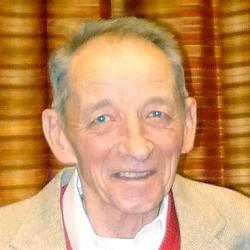 Jack E. Fisher was born August 6, 1937, in Ardmore, to Earl and Sadie Fisher. He died February 23, 2018 in Davis, at the age of 80 years, 6 months, and 17 days. He was preceded in death by his parents and brothers, John, Jim, Bill, Mayburn and Weldon; sisters, Loless and Loretta; daughter, Dina Magruder; and granddaughter, Sara Swartz. He is survived by his wife, Jan, with whom he just celebrated their 59th wedding anniversary; a brother: Charles; daughters, Kerri Williams (Thad), Shaun Swartz (Andrew); son: Patrick; and sonin- law, Monty Magruder. His grandkids are Jessica Williams (Colt), Drew Swartz, Austin Williams (Jordyn), Alex Swartz, Zac Swartz, Greyson Williams, Talley Thomas (Robert), Nick Magruder, Manon Fisher, Madelyn Fisher; and, great-grandkids: McCoy and McKinley. Jack grew up in Sulphur where he graduated from Sulphur High School in 1955. He had worked with his brothers as a crane operator on the Atlas Project, building missile silos at Altus AFB. He later worked for ITT Continental Baking (Wonder Bread). After his retirement from Wonder Bread, he worked for Sooner Foods. Jack was a member of the Vinita Avenue Church of Christ. He was also a member of the International Brotherhood of Teamsters and the Sulphur-Davis Elks Lodge. An extremely sensitive but caring man, Jack was known for his hard work and self-effacing humor as well as his dedication to family. His big heart was quickly obvious to those lucky enough to have shared with him life’s struggles and celebrations. He was giving, always-reliable, loving and strong. Jack enjoyed his grandkids immensely and was quick to give any baby googly eyes and conversation. He was a great dancer and, later in life, discovered a love for the stage. He rightfully gave up his (losing) battle with respectable golf. He was a fan of good--and bad--westerns, as well as cartoons. He will be greatly missed. Services were held at Vinita Avenue Church of Christ in Sulphur February 27, 2018 at 2:00 p.m. Interment followed at Oaklawn Cemetery under the direction of DeArman Funeral Home. In Lieu of flowers, donations may be made to the Dina Magruder Memorial Scholarship Fund at Sulphur High School.