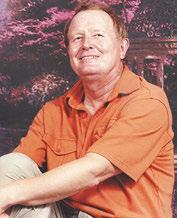 Born to Thomas Bryan and Stella Williams of Plainview, Texas, and as the youngest member of the family, he joined Winston (deceased), Bill (Sulphur, OK), Bobby (Dumas, TX), and Melba (Fruita, CO).

James attended Plainview Public Schools and graduated without honors, but that would soon change. Upon entering West Texas he began to shine academically, making the Dean’s list in his interest areas of history, English and art. With secondary teaching jobs being in short supply upon graduating, he took a position of teaching elementary students for two years in Plainview.

Desiring of work with secondary students, James decided to upgrade his education at the University of Texas with a Library Science Certification. Austin offered a variety of work experiences while attending college, but none were leading to a teaching job. After completing his education certification, he moved to Sulphur to work on his brother’s ranch. This was not his choice of a career and soon a job opened that needed his skills at Freer Independent School District in Freer, Texas, an oil field, ranching and hunting community. Quickly he got involved with the school “One Act Play” and the UL competition that became a big part of his community for the following years.

He continued his education at Texas A & I, receiving a Master’s Degree in History and a minor in Art. This completed his formal education circle giving him a well rounded background in the culture of the world in both art and literature. He could converse well with the cultures of the world leaving his family “back in the woods”. This was also full circle for a kid who almost flunked seventh grade.

Following a career in South Texas, James returned to Sulphur, not to be a rancher, but to become a “fixture” of downtown. He volunteered at the Art center and made his walking route daily until his health got the best of him. He never met anyone he did not like. He would talk your leg off and usually about things most had little interest due to lack of knowledge. He always had a book or two under his arm and his house leaned to one side due to his “bargain books” being stored all on one side of the house.

The highlight of his life was his numerous travels to Europe with educational tour groups at a time when most of his peers were trying to feed their three kids. James felt blessed with his freedom to go and to experience the world. After Europe became a bore, he began to travel with his sister’s family in Colorado where he spent most summers. He could be observed reading, painting, or just sitting looking at the mountain top sunsets.

Enjoying life as a single, free spirited teacher and avid reader of history and culture, James could converse with the best. The Titanic had been an obsession since childhood and he could be called “expert” since he could recall details that few could. He visited all the exhibits that traveled the USA and watched all the movies ever made on the topic.

Upon his return to Sulphur, he rekindled his art interest and became active in the art community.

James passed away after battling cancer for several months. He was a one of a kind and will be missed by his family and friends. He will now paint a new sunset with a unique view.