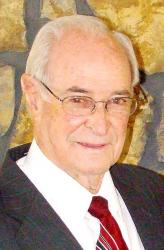 Funeral services for Jesse David “Junior” Thomas, Jr., 89, Davis, will be held 10:00 a.m., Wednesday, Jan. 31, at the Pentecostal Holiness Church in Davis with Pastors Randal Drake and Billy Staggs officiating. Interment will follow at the Green Hill Cemetery in Davis under the direction of Hale’s Funeral Home of Davis. Born April 17, 1928 in Davis to the late Jesse David and Dora Caroline (Sims) Thomas, Sr, he died Sunday, Jan. 28, in Davis. Junior and the former Ms. Juretta O. Sanders were married on June 4, 1949 in Davis. She preceded him in death on August 2, 2016. Junior was a lifelong resident of Davis. Early in his adult life, he worked as a rock mason for Venus and Robert Fullerton. In 1951, Junior went to work for the Helmerich & Payne Drilling Company as a roustabout, retiring from that same company in 1993 as a production supervisor. Most of his years with the company were spent working out of the Wynnewood yard, with his final years spent at their County Line yard. Junior was a devoted member of the Pentecostal Holiness Church of Davis. Being ordained as a minister by the church in 1966, he supplied and filled the pulpit in many churches throughout his 52 years of ministry. Junior and Juretta enjoyed traveling across the United States and to numerous foreign countries. In his younger years he enjoyed hunting, fishing, gardening and raising birds. He was also known to be quite skillful with a welder and cutting torch. Survivors include one daughter, Sandra Fine and husband Paul of Moore; son-in-law, Gary Akerman of Davis; one granddaughter; three grandsons; four great-grandchildren and numerous nieces and nephews. In addition to his parents and wife, Junior was preceded in death by one daughter, Alesa Akerman in February, 2015; two sisters, Nona Thomas Russell and Nina Russell Smith; and one brother, Foster Thomas. Serving as pallbearers will be Jesse Fine, Matt Fine, Thomas Akerman, Cade Coppenbarger, Jason Wright, Taylor Moore and Joe Thomas. On-line condolences may be offered at halesfuneralhomes.com.