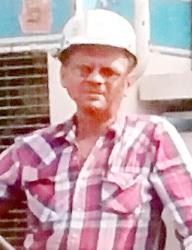 Graveside services for Johnny David West, 73, of Chalk Hill Community, will be at 12:00 p.m. on Saturday, Aug. 11, at Chalk Hill Cemetery, Henderson Texas. Mr. West died on Wednesday, August 8, 2018 in Longview, Texas. Johnny West was born October 1, 1944 in Oklahoma City. He married Mary Alice Collins on October 23, 1968 and they have lived in the Chalk Hill Area for 40 years. He was a heavy equipment operator for most of his life and moved from Oklahoma to Texas to help build the DFW airport. He retired 12 years ago from Sabine Mining. He was a man of few words but in his early years he enjoyed camping, fishing and boating with his family and playing pool with his friends. He is survived by his wife of almost 50 years, Mary Collins West; daughter, Davilon West Chapmon of Sulphur; daughter, Elizabeth West Modisette Smith and husband Christopher, of Austin, TX, daughter, Tonya West Bonner and husband Todd, of Longview, TX; 7 grandchildren; 3 great grandchildren; sister, Carol Dilbeck, of Sulphur; brother, Jim West and wife Evelyn, of Sulphur and numerous nieces and nephews. He was preceded in death by his parents, John Fred West and Betty Lou Amoson West.