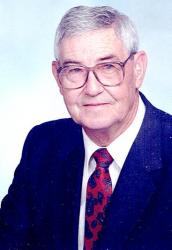 Louie Gene Richard, a 54-year resident of La Porte, Texas and charter member of Fairmont Park Church, was born in a one room cabin to a rural family in Oklahoma in 1925. During his lifetime he experienced the Great Depression, the Dust Bowl, WWII, the Korean War, and a career as a professional engineer with NASA that included putting men on the moon. Louie first met his bride of 74 years before they were in grade school, so they really were “childhood sweethearts”! They both resided in Sulphur, Oklahoma through their school years, except for the time he spent in California when his family escaped the Dust Bowl that plagued Oklahoma. Louie and Myrtle were married before they finished High School on May 20, 1943. His high school education was interrupted by WWII. He was called to serve in the Navy and they needed replacements for the men lost at Normandy. He drove a landing craft at the invasion of Okinawa and landed marines and supplies on the beach. Following the war, he joined the National Guard. His division was activated and sent to Korea during that conflict, where he led men on a mortar crew with the 45th Infantry Division. After Korea, he went to college on the GI bill. He earned an engineering degree from Oklahoma State University in the spring of 1957. He started his professional career with General Dynamics working on instrument panel design with the test pilots for the B58 Hustler aircraft. His experience building mockups for General Dynamics led to a job with NASA in 1962 where he contributed to several of the space programs including Gemini, Apollo, Soyez, Skylab, and the Shuttle Program. He worked closely with the crew, and built many of the mockups that the astronauts used to train in. In addition, he designed and built the first water tanks where the astronauts trained for their extravehicular activities in the space suits. Louie is survived by his wife Myrtle and two children, five grandchildren, and 14 great grandchildren. Children include Lou Ann, and husband John Barker, and Bill Richard and his wife Kathy. Grandchildren include Kyle Richard and wife Allison, Kirk Richard and wife Kymberly, Seth Richard and wife Latisha, Kymberly Taylor and husband Clay, and Debbie Conner and husband Tracy. Great grandchildren include Tessa, Hayden, Riley, River, Hezekiah, Ember, Galilee, Gabriella, Kyra, Annabella, and William Richard; and, Kayla Lyons and husband Andrew, Abby Taylor, and Noah Taylor. A Celebration of Life Memorial will be held at Fairmont Park Church , 10401 Belfast Rd, La Porte, Texas. Services will be postponed for family reasons until August 26, 2017 at 11:00 am. Friends are welcome to attend. In lieu of flowers the family requests donations be made to: Abbie Lane Christian Retreat Ministry, 7581 Hwy. 71, Coushatta, LA 71019. Web site: abbielane.org Email: wdspears45@gmail.com