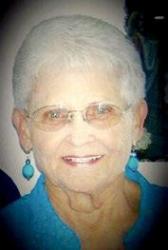 Funeral services for Tahwannah Carlene “T.I.” (Hendricks) Knight will be held 2:00 p.m., Thursday, December 7, 2017 at the Dougherty Baptist Church with her son-in-law, Rev. Jim Burgess and Rev. Eddie Dye officiating. Interment will follow at the Green Hill Cemetery in Davis. T.I. was born August 11, 1934 in Sulphur, to the late John Biard and Oma Modena (Stringfellow) Hendricks. She died Saturday, December 2, 2017, in Wilson, at the age of 83 years, 3 months and 21 days. T.I. grew up in Dougherty, where she attended school. Following high school, she married James Harold Gaddy. Together they owned and operated Pick’s Tamales for 20+ years. T.I. later owned and operated T.I.’s Lil Mexico Restaurant for several years. In addition to her restaurant businesses, she worked as an independent mail carrier for the U.S. Postal service for 30+ years. T.I. was a very outgoing, outspoken lady. She had the tendency to be the life of the party, wherever she was. T.I. was known to bring a laugh or smile to others she was around. In her spare time, she enjoyed doing crafts and playing cards and dominos with her family and friends. T.I. was a member of the Dougherty Baptist Church. Survivors include three daughters, Alanda Gayle Burgess and husband Jim of Dubai, UAE, Amanda Louise Johnson and husband Buster of Ardmore and Waukita Carlene Swales and husband Joe of Houston, Texas; one son, Terry Kim Gaddy and wife Becky of Davis; 13 grandchildren; numerous great-grandchildren; and one brother, Richard Sterling “Rick” Hendricks and wife Billie of Collinsville, Texas. In addition to her parents, T.I. was preceded in death by two brothers, John Harvie Hendricks and Don L. Hendricks; five sisters, Zellna Charlene Hendricks, Arva Amanda Jack, Oma Lee Pearman, Dortha Louise Rubick and Elizabeth Ophelia “Beck” Hunt; as well as, the father of her children, James Harold Gaddy; and husband Keith Knight. Serving as pallbearers will be her grandsons. On line condolences may be offered at halesfuneralhomes.com. Services were “Entrusted To” Hale’s Funeral Home of Davis.