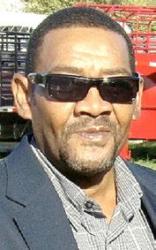 Funeral services for Tommy Lee Ervin will be held 1:00 p.m., Friday, Jan. 19, 2018 at the Gilfield Baptist Church in Davis with the Reverend Fred Johnson, Jr. officiating. Interment will follow at the Five Mile Cemetery in Hennepin under the direction of Hale’s Funeral Home of Davis. Born August 16, 1955 in Sulphur, to W.M. and Clara Mae (Ervin) Shirley, he died Wednesday, Jan. 10, in Oklahoma City, at the age of 62. Tommy grew up in Davis, where he graduated high school. He spent most of his career working in maintenance. Most recently, Tommy was working in street maintenance department for the City of Oklahoma City. In his spare time, he enjoyed fishing, swimming, cooking and being with his family. Survivors include his wife, Tevaner Bradford of Oklahoma City; mother, Clara Shirley, of Davis; seven children, La`Keisha Bradford of Oklahoma City, Tammy Fields of Texas, Aundre McDonald and Thomas McDonald of Davis, Demekedrick Bradford and Shemar Bradford of Ardmore and Shamont Fields of Texas; one sister, Anita Shirley of Davis and numerous grandchildren and great-grandchildren, aunts, uncles, nieces, nephews and cousins. Tommy was preceded in death by his father, W.M. Shirley, on September 6, 2016 and one brother, Willie Melvin Shirley, Jr. on January 6, 2008. On line condolences may be offered at halesfuneralhomes.com.